One week ago we spent about 22 hours travelling from Vancouver to San Jose, Costa Rica. For some reason we had to go via Los Angeles and Miami which made for a long journey. There were the obligatory close calls, such as realising we left Nayou’s haemophilia medication in the fridge on the way to the airport, Brenda leaving her favourite jacket on the plane in Miami (and finding it!), and almost forgetting our booster seat at baggage claim, but apart from that it was painless. I’m so grateful that Nayou is such a seasoned traveller and is easy going. With so many changes and pieces of baggage to keep track of, having an unruly child would have made the trip hell!

We landed in San Jose and picked up our rental car for the next 3 months. Renting a car in Costa Rica in expen$ive, mainly because there is this mandatory insurance you have to purchase which jacks up the price by 2-3 times the price of the rental itself. Still, we figured we may as well do Costa Rica properly, so we bit the bullet. Our trusty steed is a Daihatsu Terio, a compact 4WD. Its small engine isn’t exactly inspiring, but its small size makes it easy to drive around and you can’t go much faster than 100km/h on the highways here anyway so we’re not complaining. 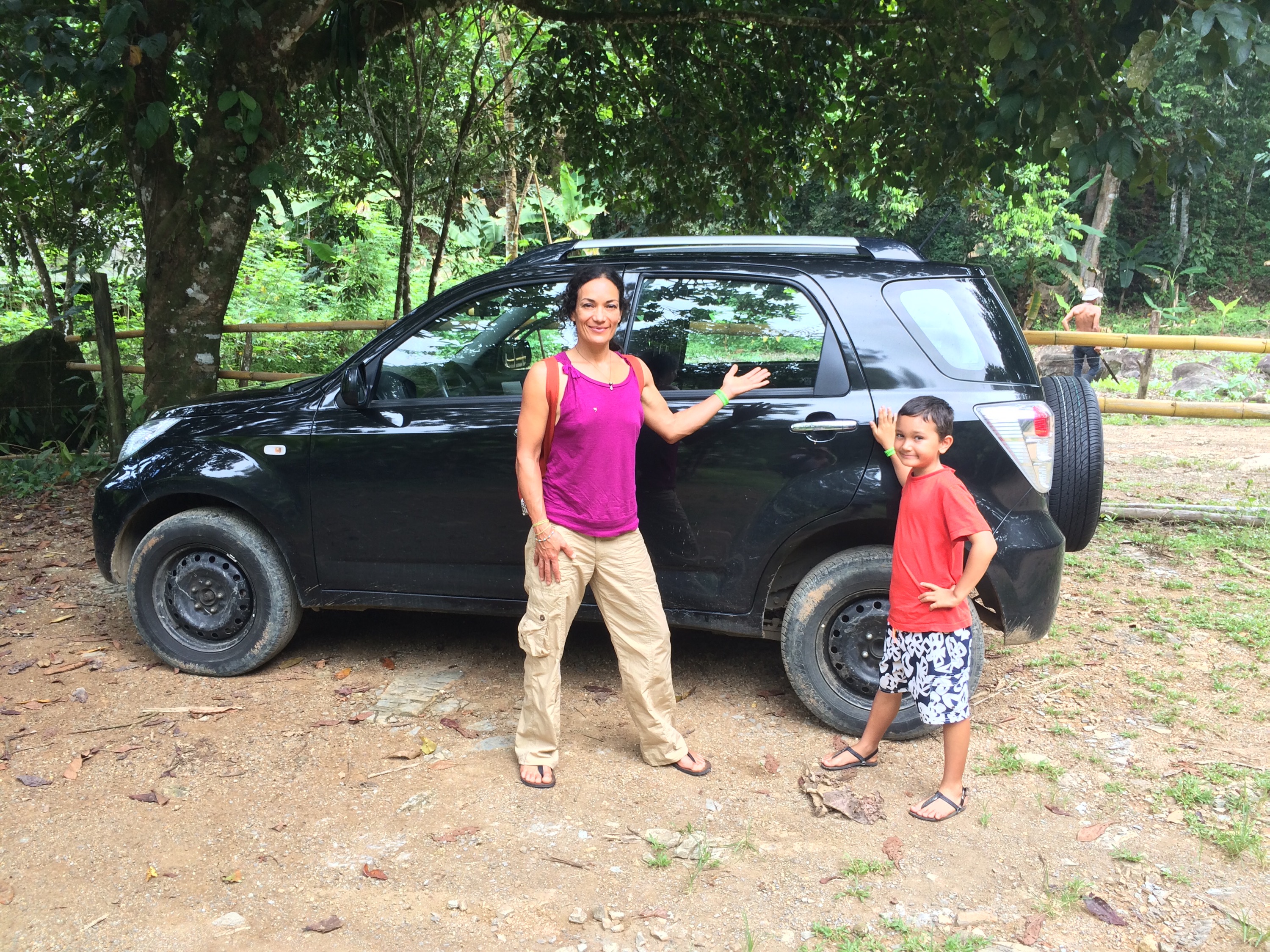 Our first two days here were spent in the capital city San Jose. I can’t say I was very impressed with the city at all. The place felt dusty and chaotic, and a little impersonal. We stayed in an area called Escazu, which by all accounts is the nicest area (and where all the expats live). There’s a big mall there with all the western chains like Zara, Forever 21, blah blah. Next to the mall is a Walmart. You get the picture. We thought we would get some random essentials like tupperware, a boogie board and maybe some sun shirts, but those plans were quickly squashed when we saw the prices. We knew Costa Rica was expensive, but holy moly! Groceries are more expensive than Vancouver, and other goods are on par or waaaay more. We wanted to pick up some birthday and Christmas gifts for Nayou, but a deck of Pokemon cards costs $35USD ($12USD in Canada), and a medium sized lego set will set you back $50USD ($30USD in Canada). Guess Nayou may have to be happy with some guacamole and chips in his stocking 😉 Speaking of money, Costa Rican dinero is super cool. 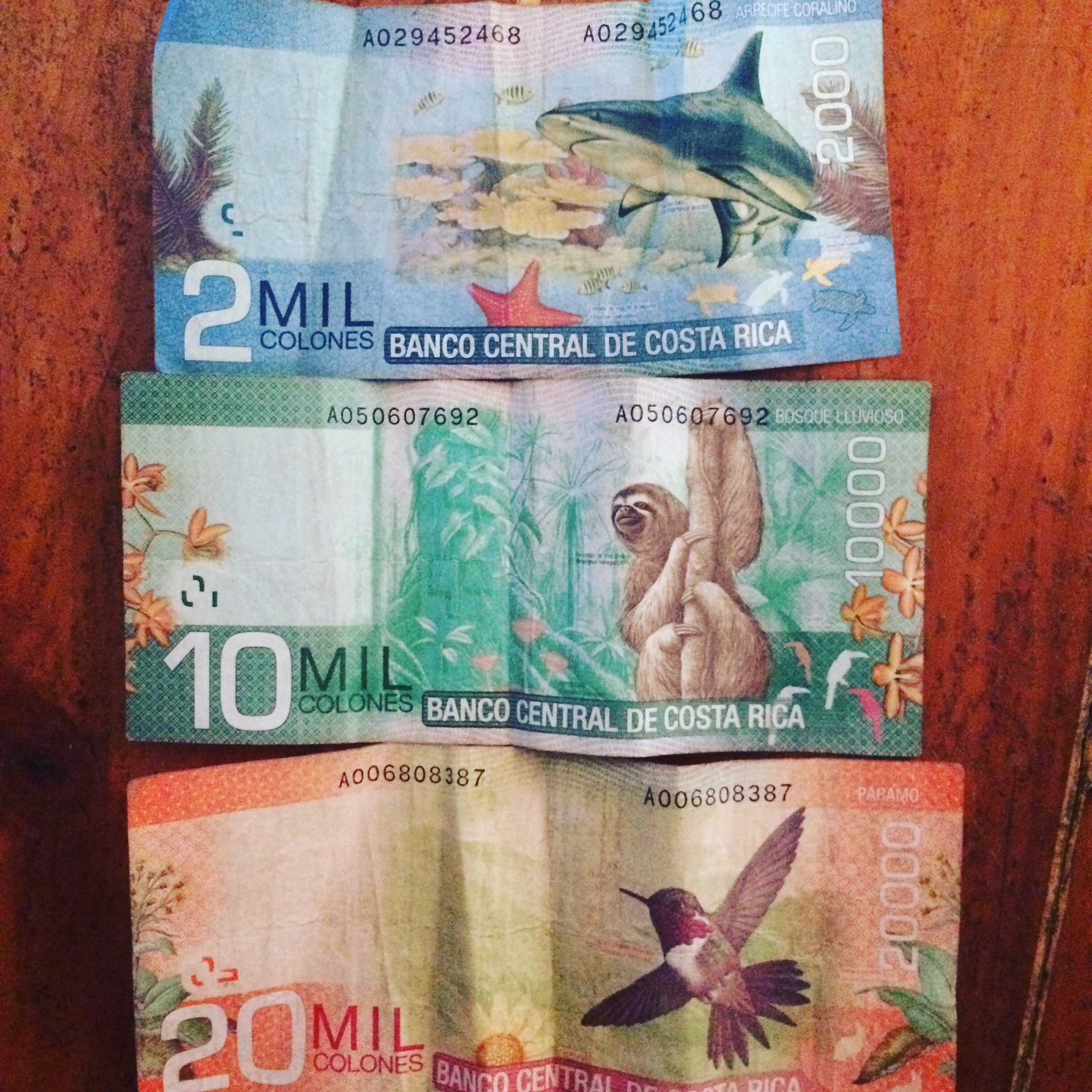 Some random guy from Tennessee in Walmart freaked Nayou out with a story about how he used his stun gun on thieves who tried to rob him, so one day in and he was already asking to go back to Vancouver. Poor little guy. I think he picked up on the stress that Brenda and myself were feeling as well. Whenever I move to a new place I always go through a freak out period which lasts about a week, so I kind of knew that this was part of the process, but I have to say I was worried that we had made a terrible mistake!After our time in San Jose, we hopped into our car and drove four hours to our first “real” destination, the river house. 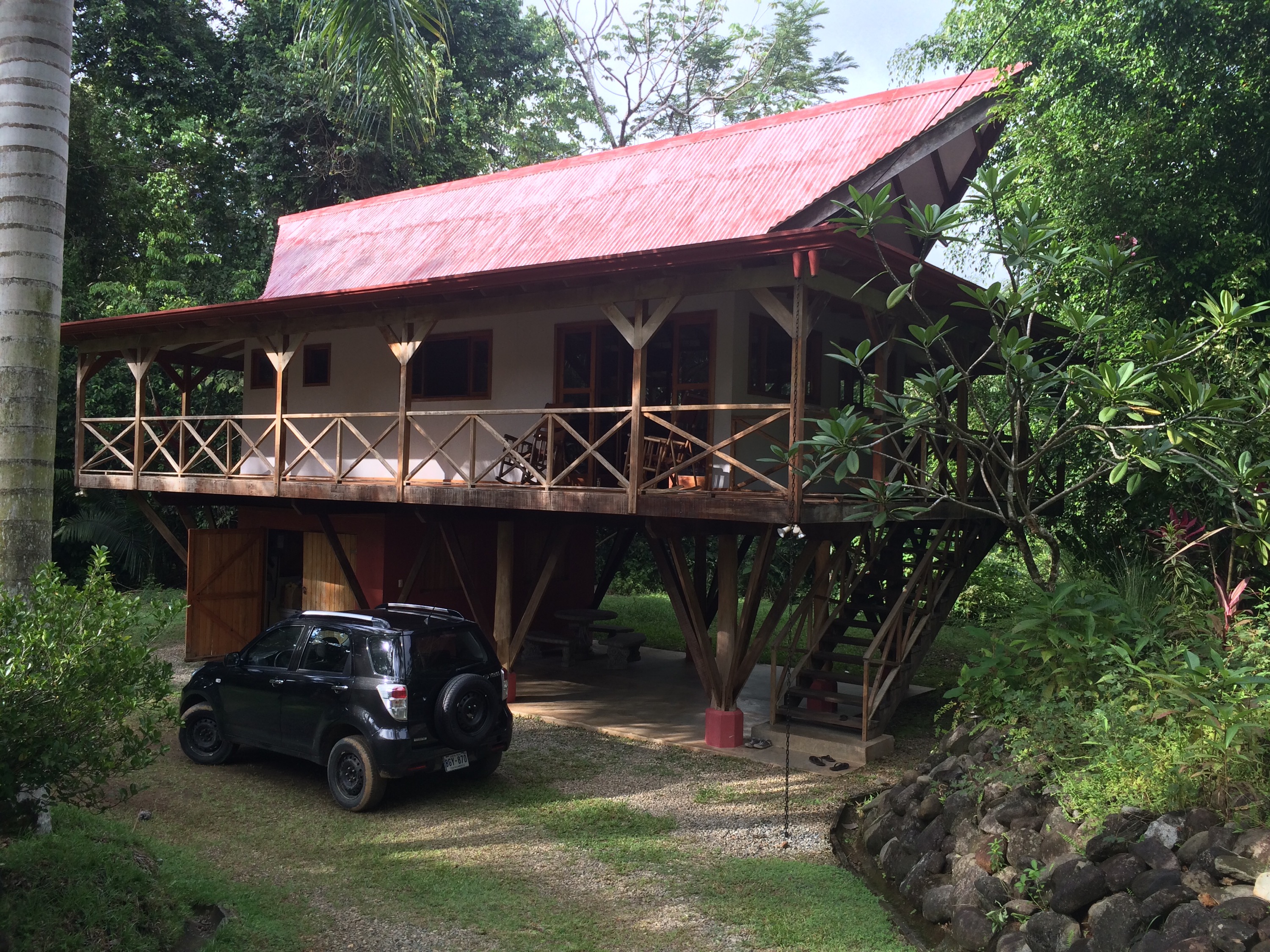 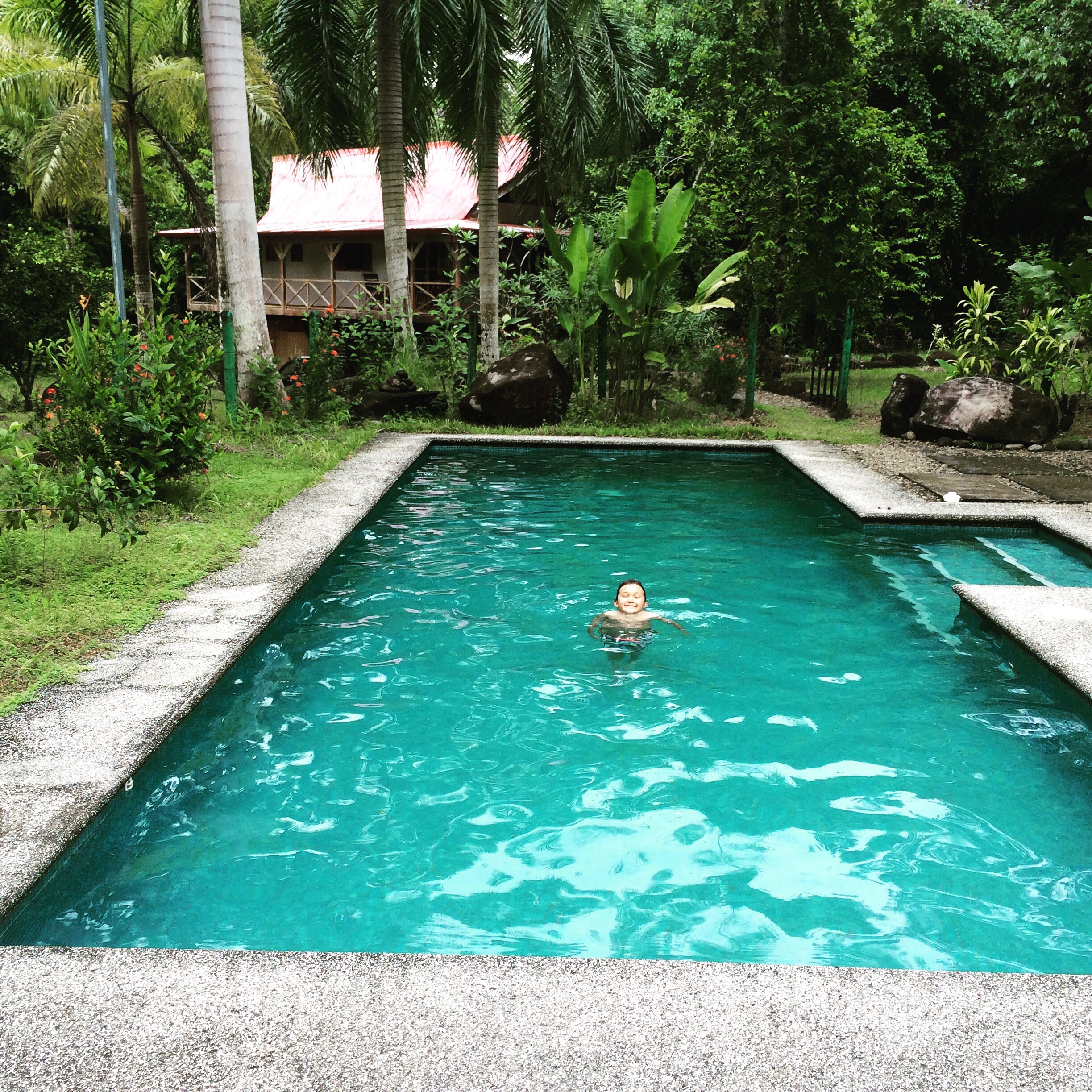 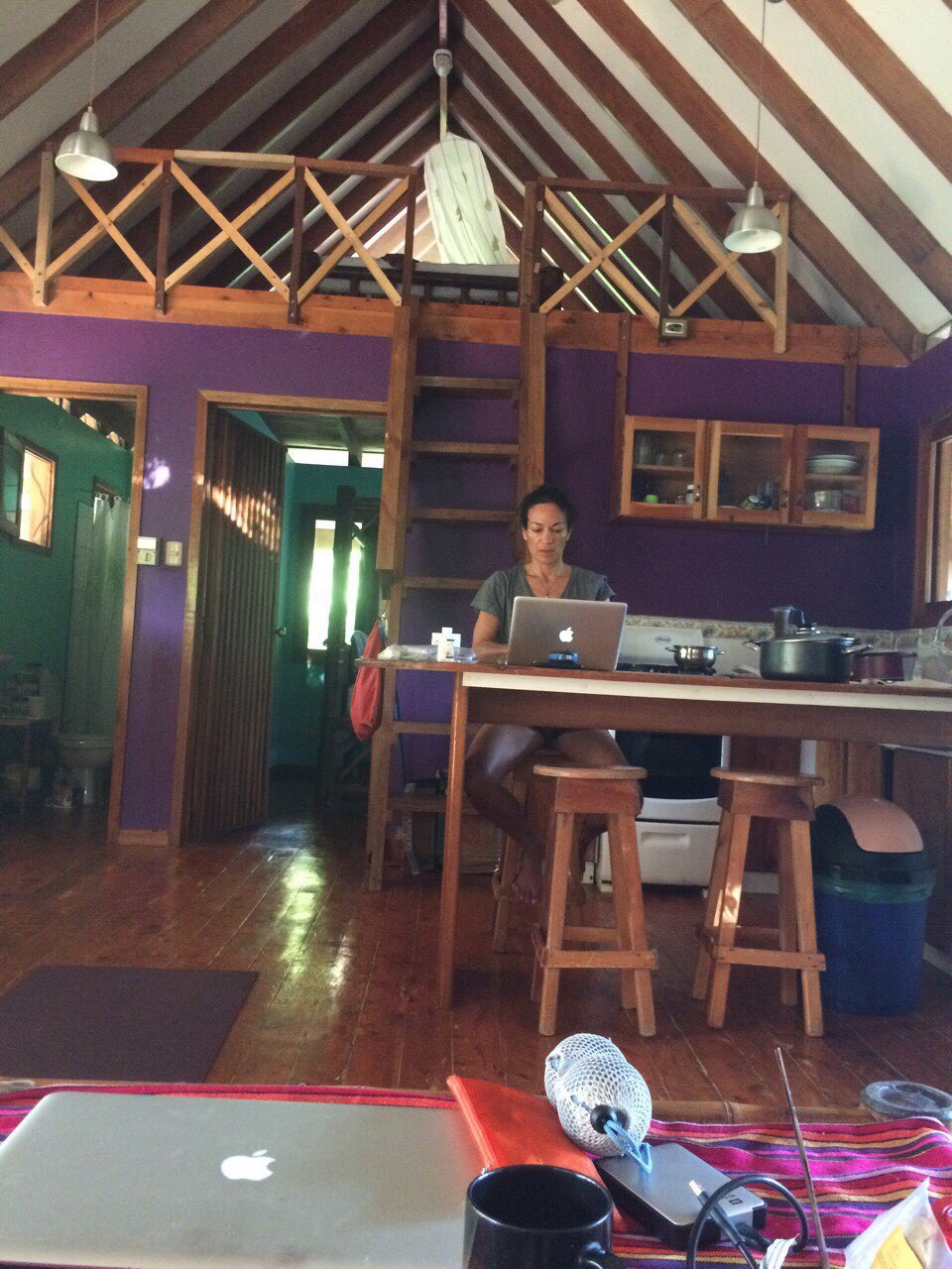 We found this place online pretty early on in our searches and loved the look of it. It sits in a jungle five minutes from the beach, with a saltwater pool, a small cabana with air conditioning and a rustic main house to live in. The house is right outside of Uvita, a small coastal town on the southern Pacific coast. Its famous for its Marino Ballena National Park which has a huge sandbar shaped like a whale’s tail. Dominical, an up-and-coming surf town, lies about 10km to the north. 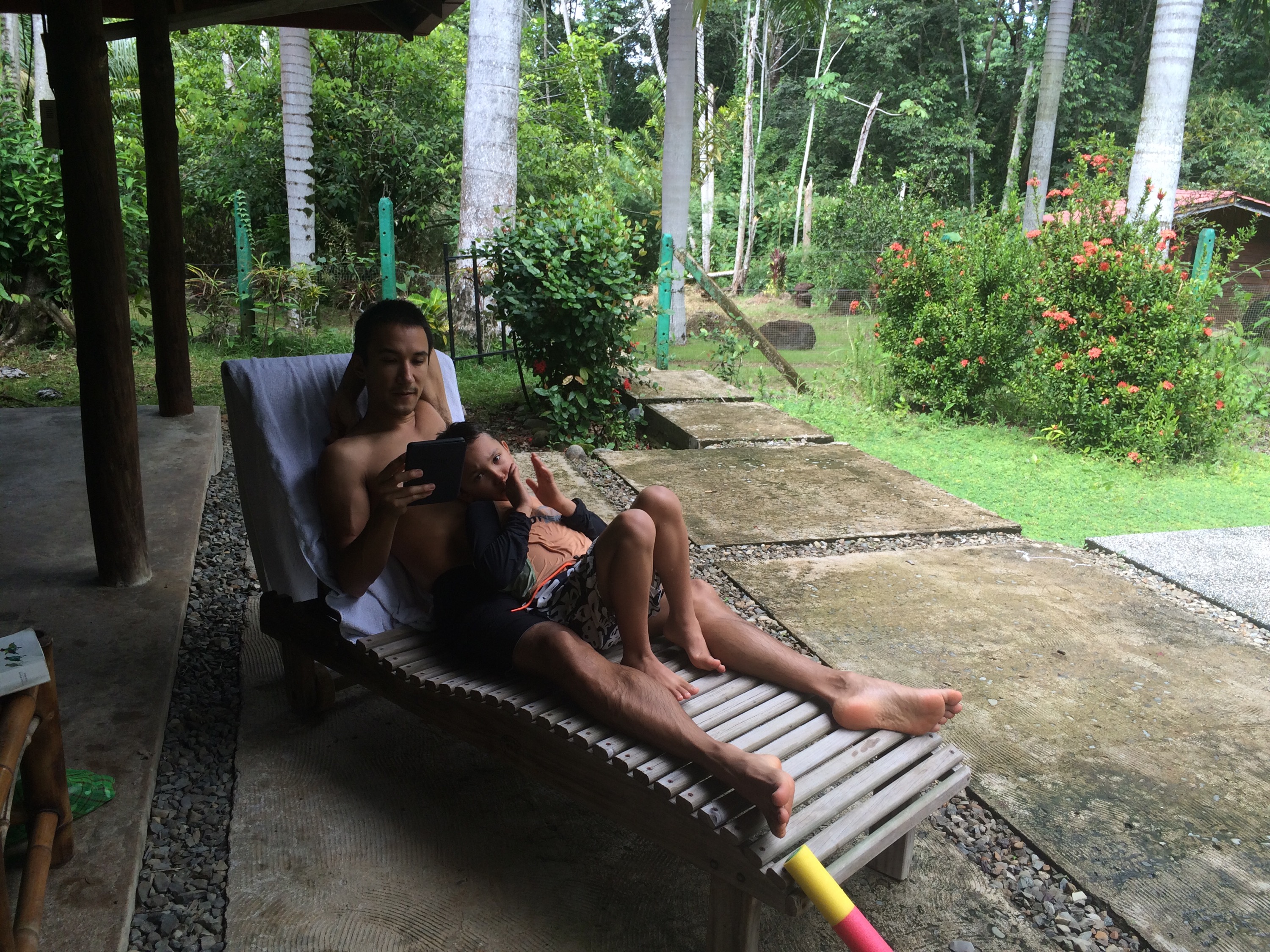 One of our goals has been to keep screen time to a minimum and so far it has been a success. Nayou gets 20 minutes a day which he usually uses first thing in the morning and then we sometimes watch an episode of Cosmos or a BBC series called Human Planet. It feels great to be so much more active in our daily lives, especially for me! I’ve noticed Nayou is a lot more open to jut hanging out and doing nothing instead of asking to be on a device by default. Yay. I guess the pool certainly helps! 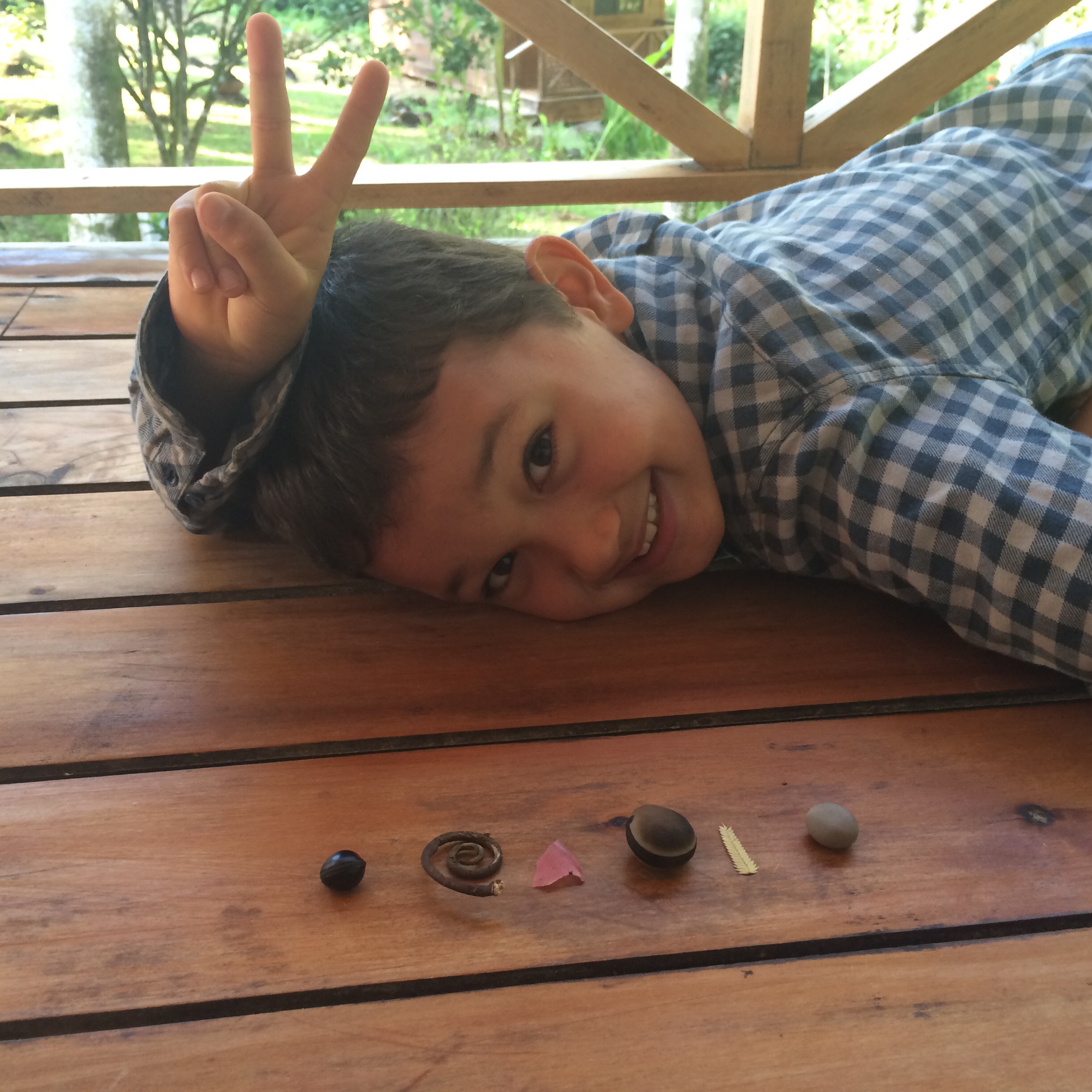 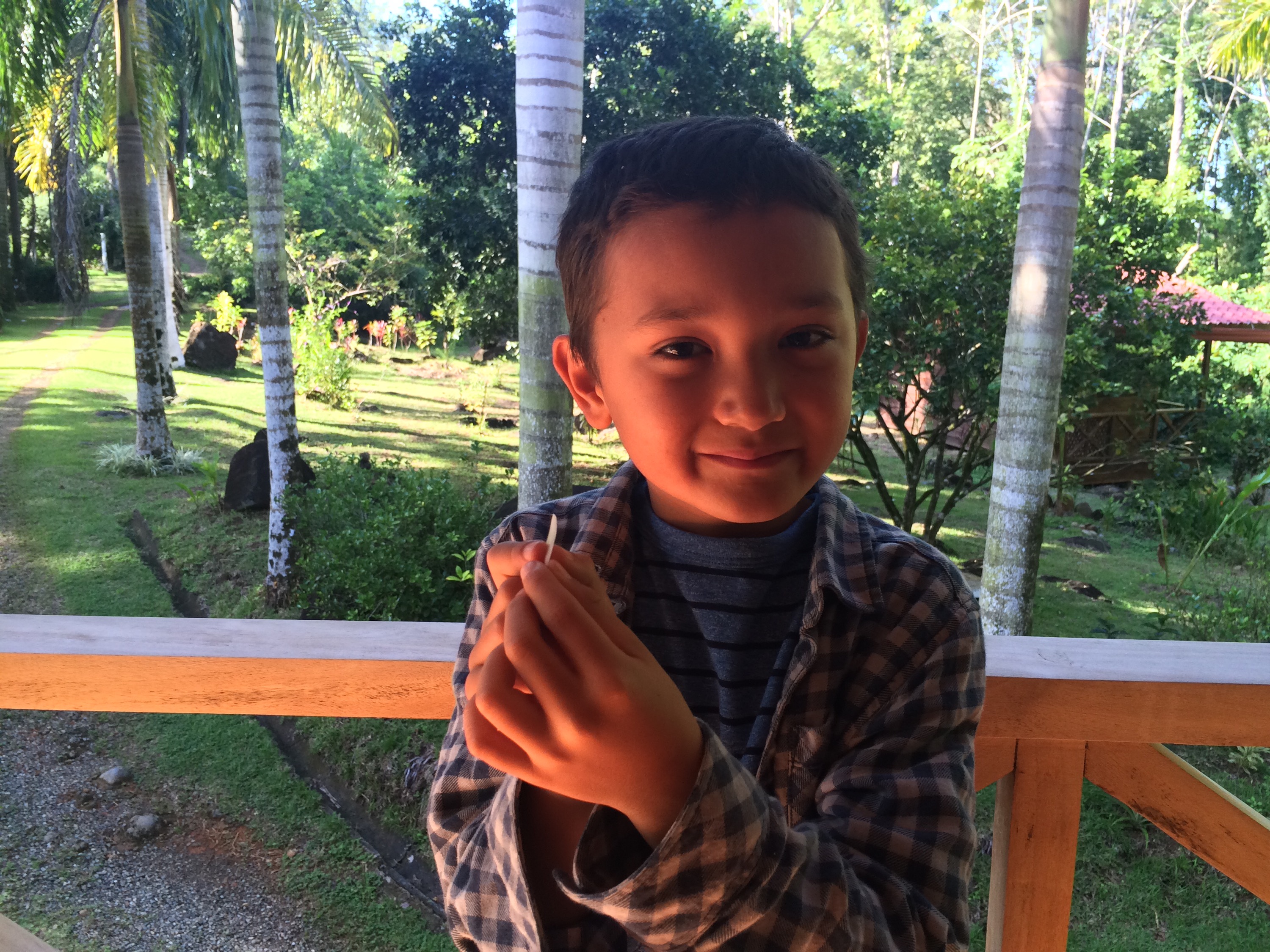 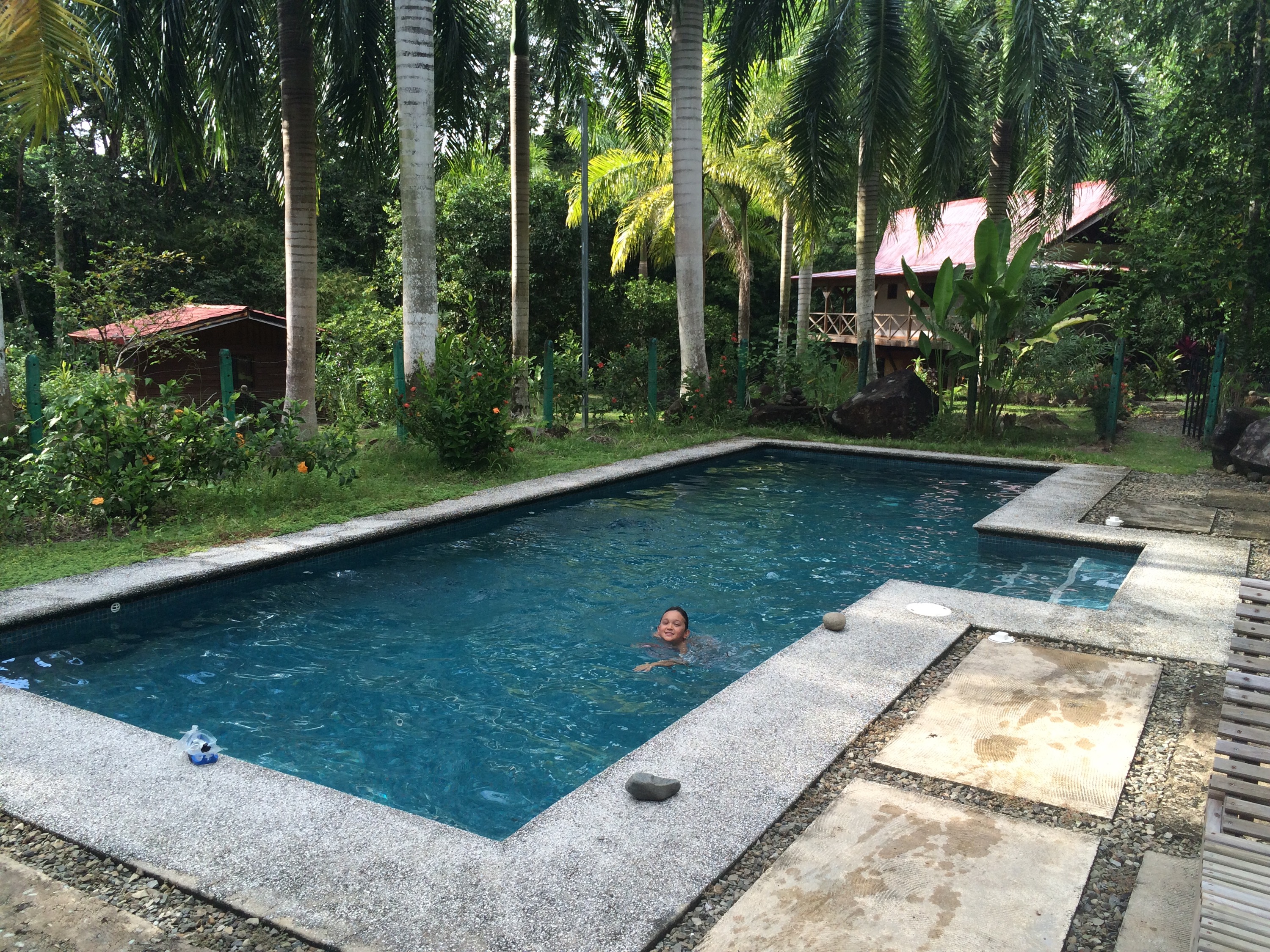 Its been about a week since we’ve arrived and we have settled in very nicely. We have been spending a LOT of time at the pool, playing Uno and teaching Nayou how to play telefunken, an Ecuadorian card game that is a lot of fun. We’ve also checked out some of the surrounding beaches and nature. But I will save details of those adventures for separate posts. Pura vida! 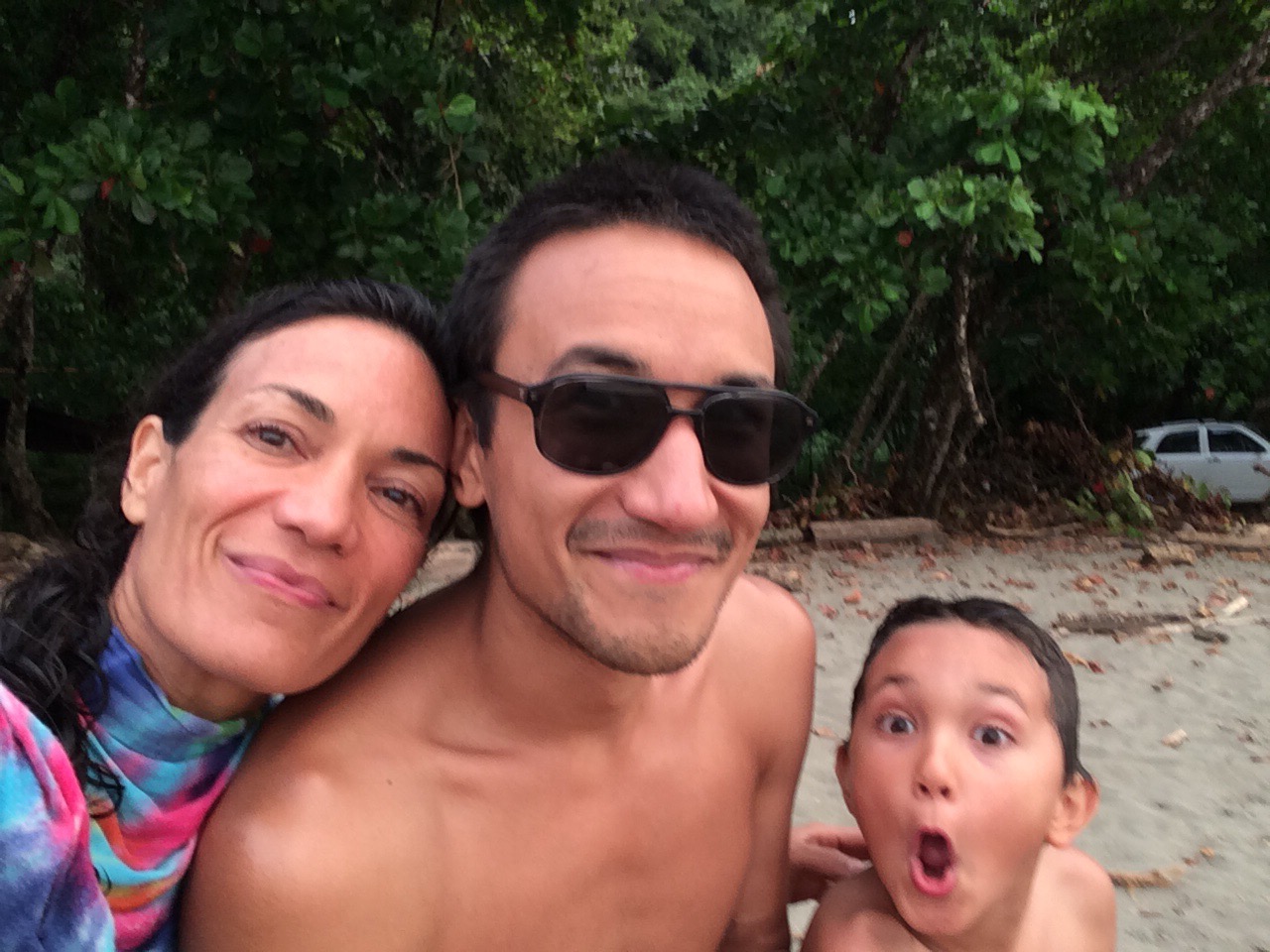 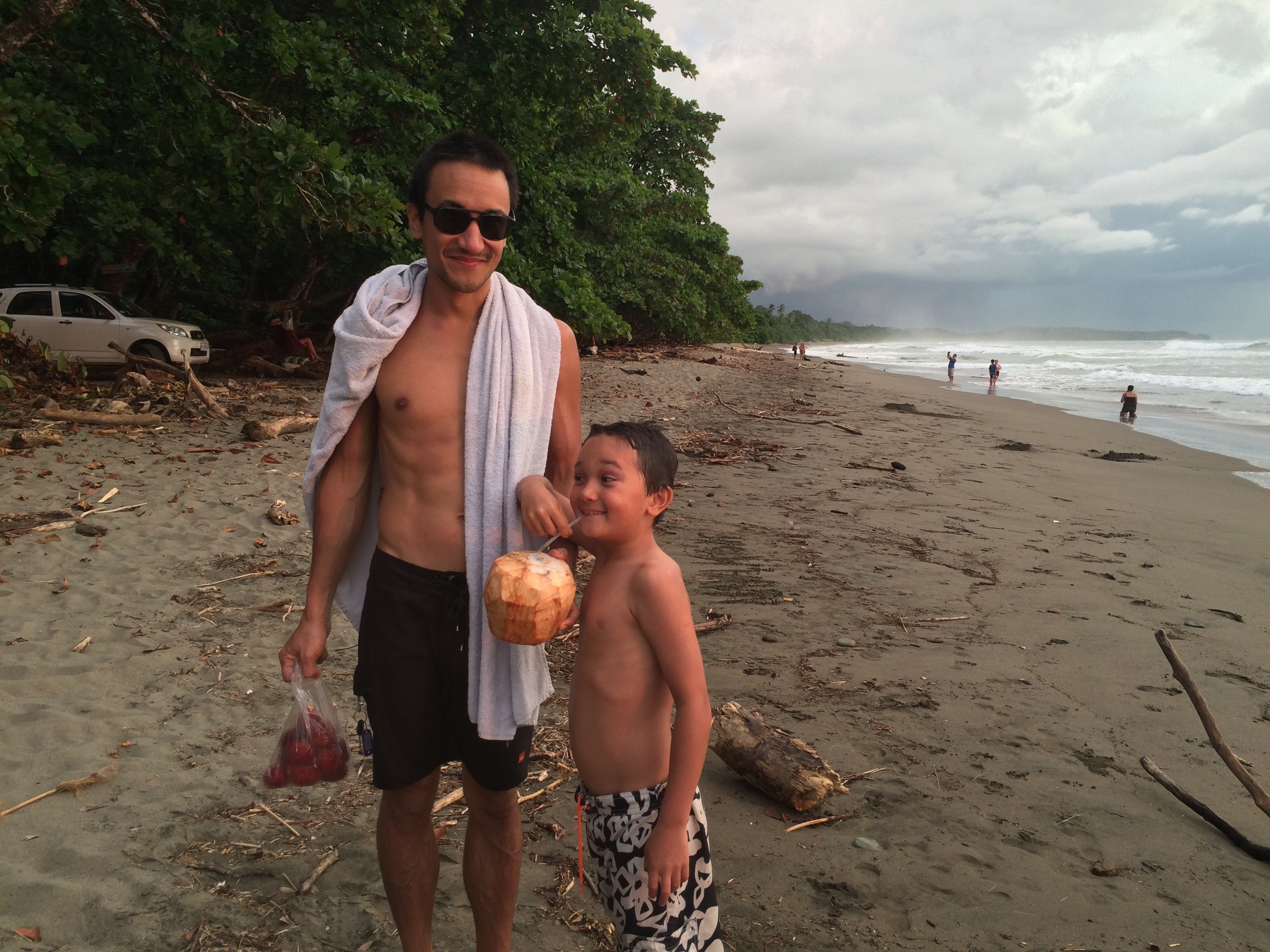