so i think i’ve mentioned a couple of times that nayou is currently obsessed with fishing. he’s going to continue his love of the sport in vancouver, but brenda and i really wanted to give him a chance to go out on a proper fishing trip in sayulita before we left.

unfortunately the fishing boats charge an arm and a leg. fortunately our friend jorge is possibly just as obsessed with fishing as nayou. brenda called jorge yesterday and organised an outing on his kayak to go find some fish. nayou was sooo excited, its all he talked about all afternoon. he got his “fish pack” ready with all of his gear and sprung out of bed like a wild man at 7.30 this morning. the two men ventured out into rough-ish seas and came back with this: 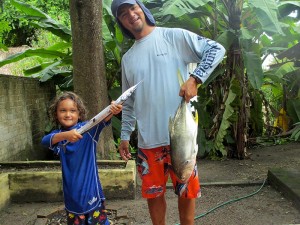 wow! apparently nayou got sea sick and threw up on the ocean, but even that didn’t phase him in the face of such an awesome catch. we’re having a farewell party at a restaurant tonight so guess whats on the menu??