every village in bali has its own temple. and every six months there is a big ceremony in each of them to honour the gods. a similar thing happens in family temples as well. kutuh kajah (north kutuh) is the name of the village we live in, and last week they had their bi-annual ceremony. each village brings its own flavour to the ceremonies, and our village does it right by turning it into a bit of a festival with food stalls, lots of music and late nights. we’ve been to a couple of ceremonies so far but this one was the coolest one by a long shot.

here is brenda with our friend nyoman. 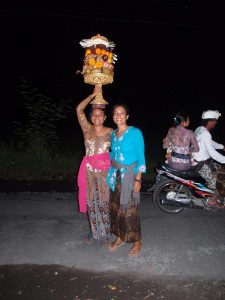 and here is a video of the different performances. they just kept on coming one after the other, and we actually left before it all finished. our friend budi said that the festivities went on until around 1am!