i’m in our hotel room in sydney right now thinking about how long its been since i blogged, how much has happened, trying to figure out how to write about it in a way that’s going to let me go to sleep at a reasonable hour tonight. i’ll start with the most recent news of ours, which is that after two weeks of battling with sydney’s outrageous rental market, we finally put a deposit down on a place. as of november 1st, our new abode will be this awesome 2 bedroom, 3 bathroom (!) unit in woolloomooloo. its a mouthful to say and even worse to type, but that’s going to be our ‘hood for the next six months! its not exactly what you would call a family friendly neighbourhood, given the large number of homeless people wandering around – the real estate listing called it a “vibrant” neighbourhood – but its close to hyde park, to the bus and train stations, and to work (i can walk there in under ten minutes). we’ll post pics as soon as we move in, but in the meantime there are some here. we like our hotel, but its going to be nice to finally spread out! so that’s the exciting bit of today. let me step back about a month in time and recap our adventures getting here.

our first stop after geneva was los angeles. dr. d ended up booking our flights during the day, and i was dreading spending twelve hours on a plane with nayou. luckily my fears turned out to be totally unfounded – nayou is officially the best travelling little kid ever! it did help that we got bumped up to premium economy, which offered us movies on demand, lots of leg room and a small space to lay out some toys and play. nayou was a model citizen throughout, and some passengers even commented on how awesome he was. high five! 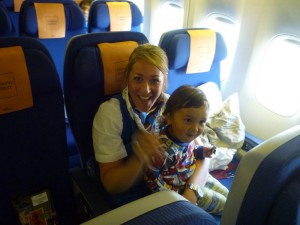 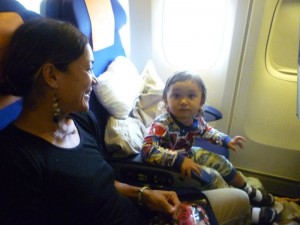 our stay with aya was only four days – just enough to get over jetlag before plunging into it again – but it was exactly what we needed. aya, as always, was an amazing and gracious host. her place is a real oasis of calm and its the perfect spot for some r&r after a long haul. nayou hadn’t seen her for five months, but was comfortable with her right away and they were playing silly games the whole time! 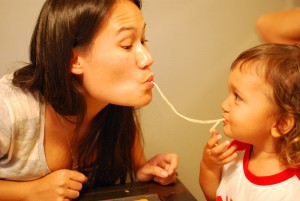 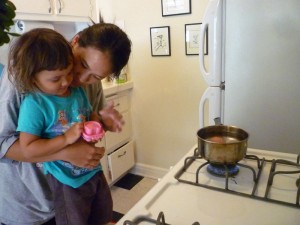 i have some video from our time in l.a., but i’m having trouble uploading it to youtube. one of the reasons why its taken so long for me to post anything is because the internet in our hotel sucks. like, really sucks. we paid $160 for a monthly subscription to their broadband service, but reception forgot to tell us that we had a download limit of 8gb. brenda and i have been into these amazing online yoga classes, which are about 700mb a piece. we went over our limit very quickly and have been struggling with throttled service ever since. it really sucks, yo. but our laptop is patiently chugging away at the upload so i will post it when its done – only 244 minutes to go!

since we were on the west coast, brenda took the opportunity to head up to san francisco to see kris and christie for two days. so aya, nayou and i held down the fort in socal. we had a day at the zoo with chiara, whom nayou first met when they were both around six months old. now they are both running around and chatting up a storm! it was cute to see them having a good time with each other – you’ll have to wait for the video to see what i mean! 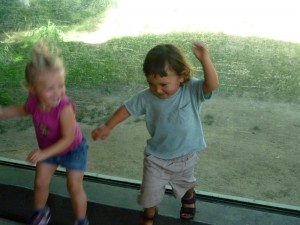 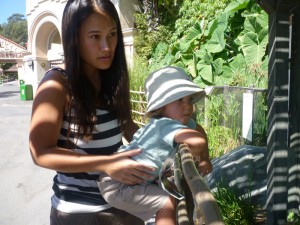 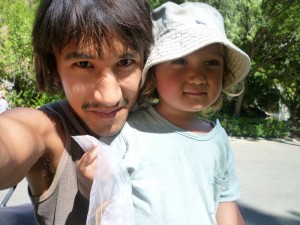 we also splurged big time in the ice cream department, with nayou getting almost daily trips to pinkberry, plus his first taste of mochi ice cream in japantown. this smile really says it all: 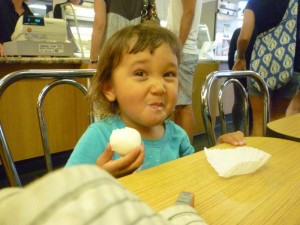 and since we were in japantown, we had to make a ramen stop! 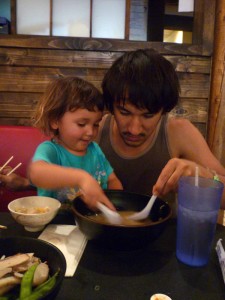 piggy was also in good form. brenda and i swear that he got skinnier and more toned since the last time we saw him, but according to aya this is not the case. he’s still a bundle of cuteness, whatever he looks like. piggy really likes nayou, but nayou took a while to warm up to him. if you heard the noise this dog makes when he breathes you would understand why. its like darth vader with snorts. its all part of his charm! 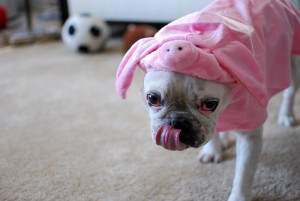 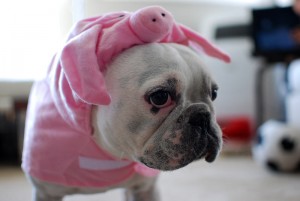 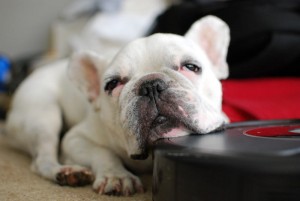 after our all too brief stopover in the states, it was time to pack our bags again and brace ourselves for a fourteen hour flight to sydney. at least this one was a red eye, so its not like we had to worry about entertaining nayou for the whole time, but fourteen hours is a crazy long time to be stuck in a steel tube in the air. but once again nayou was a complete rockstar and we made it halfway across the world without any hassles at all. we were very tired though! we arrived on a gorgeous day so we tried to stay up for as long as we could by walking around the botanical gardens and hyde park. 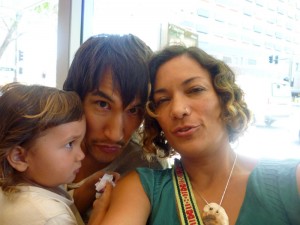 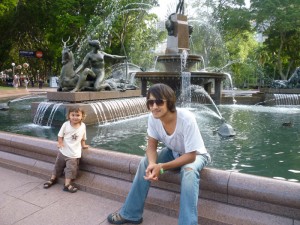 we were in for a bit of a shock when we got to our hotel – the hr people at dr. d had booked us into a very small room. it would be small even for a single person, but for three it was just ridiculous! we couldn’t even unpack our bags because there was no place to put anything! 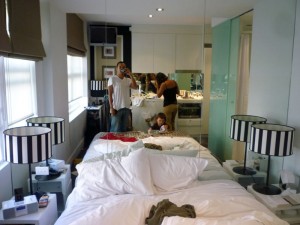 we spent three days in that little space above before they took pity on us and moved us to a bigger room. we now at least have space to move around and have a bit of a play, and even though its still just one room, its strangely cosy and not too much trouble even after three weeks. humans are nothing if not adaptable i guess! here’s nayou all happy that we finally got around to unpacking his toys. 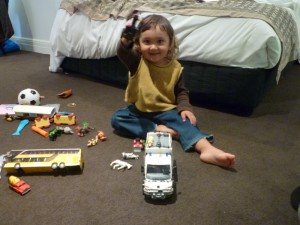 i started work bright eyed and bushy tailed, ready to build a kick-ass pipeline for mad max. on my first day i met the team (only 14 people) and tried to get the lay of the land. i realised that i really did have more or less a carte blanche to do whatever i wanted, which is very cool. plus they put this one guy edwin on my team who is just amazing. he’s a great guy to work with and we quickly established a great rapport together. i started on a friday, which meant that i got to enjoy my first lunch at the pub (a weekly tradition), plus drinks at 5. not a bad start for my first day! i went back to work on tuesday since it was a long holiday (double bonus!). on tuesday afternoon i noticed that everyone was being called around for a meeting so i quickly ducked out to the bathroom to pee. when i came back up the meeting had already started so i tried to pick up what was going on by listening in. by the time i heard “mad max”, “pushed”, and “up to one year” in the span of a few sentences i felt my heart sink. we were assured that we would still have jobs, even though the movie has been postponed, but no-one was really happy about that since the only other movie dr. d is working on is “happy feet 2”. there has been rampant speculation as to why the movie was pushed, and i’m sure there are many reasons why that decision was made, but the bottom line is that it sucks big time for me. i have been offered a position on the r&d team, where it is likely that i will end up, but having my pipeline dreams dashed is sad. we’ve been chugging away like the movie is still happening, but we all know that the axe is going to fall any time now… which is why we are signing a six month lease on our house. we want to give living in sydney a go, but i don’t necessarily want to be doing something i’m not excited about for too long. i’m not giving up hope that i will get to work on something awesome, but in this situation its good to hedge your bets 🙂

one of the things about being back in one of your home countries is that you get to see lots of family! everyone has been so supportive and welcoming since we got here, especially my aunt r’adele who gave us a tour of sydney in her car, organised a visit to see my grandfather, and hosted a party to celebrate our arrival! 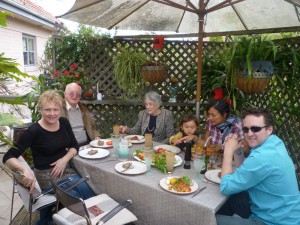 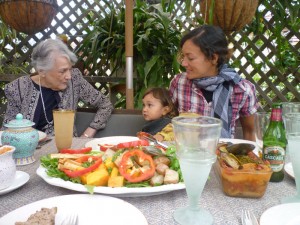 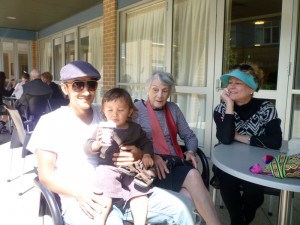 and we even get a visit from grandma, who is here from geneva for two weeks as well! 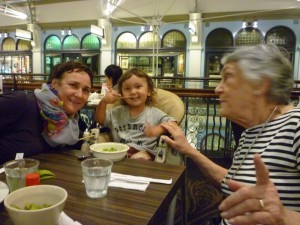 there is lots more to write, but its getting late and i can no longer resist the call of our bed. so here is a random photo of us in darling hrabour: 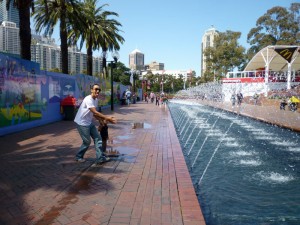 another one of nayou befriending a busker in town hall station: 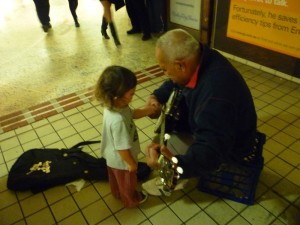 and two more from our visit to manly beach this sunday. manly is really cool – beautiful beaches, funky stores and good surf. we would have loved to have lived there if it wasn’t so expensive and rather far from the city… good night! 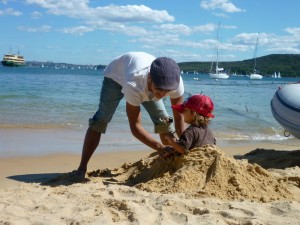 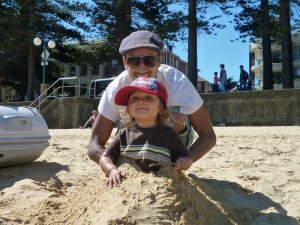