this morning we bid a sad farewell to our best friends in sayulita. i suppose we all knew that this day was coming sooner or later but it doesn’t make it any easier. especially since we had about one week’s notice! brenda and i managed to get a surf in early in the morning so we were all mellow when dmitri and heidi rocked up to the plaza with their kids for one last play. a good thing too because it could have been an emotional disaster otherwise!

the four of them are going to be settling down in hawaii for the time being, so at least it won’t be too different from sayulita. but i know that sayulita is not going to be the same without them. they’ve only been gone for a few hours and i already miss them! that’s ok though – something tells me that our paths will be crossing in all kinds of places in the future 🙂 bon voyage! 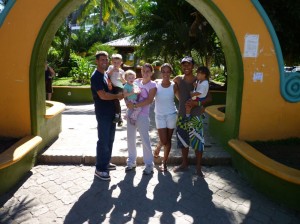